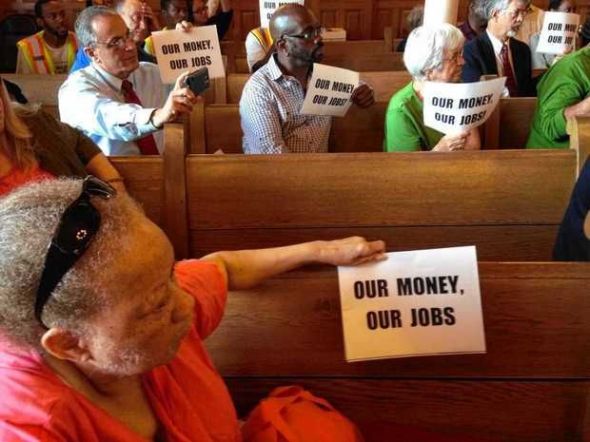 Over 20 members of the Urban Jobs Task Force testified at the monthly Syracuse Industrial Development Agency meeting on June 17th and according to the Syracuse.com article on the meeting 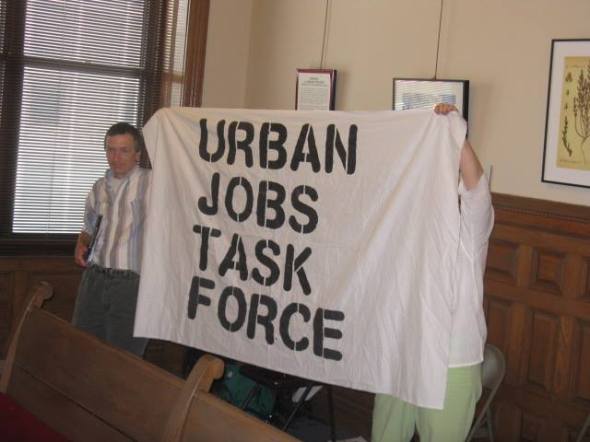 “beseeched the Syracuse Industrial Development Agency, one after another, to impose stricter local hiring requirements on tax-subsidized projects including COR Development Co.’s development of the Inner Harbor.

Unfortunately, the SIDA Board unanimously, AND WITHOUT COMMENT, approved the tax breaks proposed for the entire first phase of the project–a hotel to be built by the Starwood Hotels and Resorts Corp. and planned, yet not detailed luxury apartments. The tax breaks were an exemption from paying the County’s mortgage recording tax and a break on sales tax for materials purchased during construction. 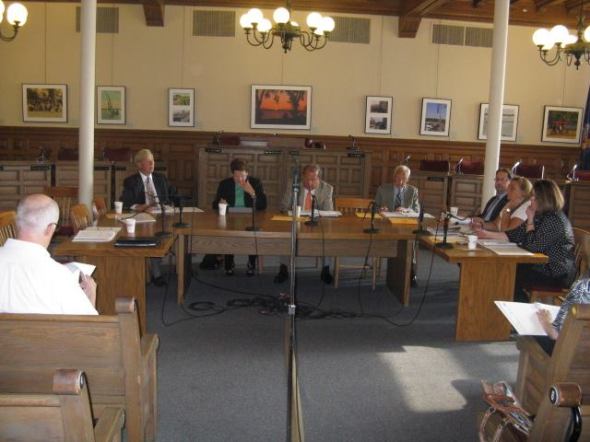 The loss of both of these forms of tax revenue from the project have real-world implications for the residents of our city. Ten percent of the annual budget for Centro, the area’s mass transit system comes from the mortgage recording tax. In addition, the city’s share of area sales tax has become the largest portion of locally-raised revenue for financing city services–police, fire, DPW, Parks etc.

NY State Governor Andrew Cuomo announced the results of the third round of funding for economic development projects through his Regional Economic Development Council (REDC) initiative.

As part of the $67 million awarded to the CNY region, COR Development will receive $1.3 million to continue development of the Syracuse Inner Harbor, including relocating the historic freight house and removing three abandoned storage buildings, and constructing a 170,000 square foot mixed-use commercial/residential building.

COR Development has received significant funding for the Inner Harbor development project through the Regional Economic Development Council process in the first two rounds of funding as well: $3 million in 2011 and another $1.5 million in 2012. 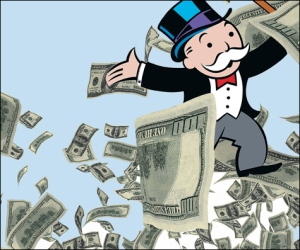 Two blocks from the proposed Inner Harbor project of COR Development, developers are proposing the rehabilitation of a commercial building for use by two different firms–one a financial services firm and the other a sports medicine practice.

The financial firm estimates that 100 jobs will relocate from the Onondaga Co. suburbs and they will create an additional 50 jobs over 5 years.

Unlike COR, the developers are not being coy about their intentions to ask for public benefits. The group 706 N. Clinton LLC has applied for a $500,000 state grant to do asbestos and lead paint remediation. They are also asking for a 10 year, $1.2 million package of tax incentives from the Syracuse Industrial Development Agency: $896,720 in property tax discounts, $240,000 in exemptions from sales taxes on construction materials and $65,000 from an exemption from the state mortgage recording tax.

On October 15, the UJTF attended a public hearing held by the Syracuse Industrial Development Agency (SIDA) on the draft Environmental Impact Study conducted for the Inner Harbor project. The UJTF through Aggie Lane presented verbal and written comments calling for the designation of Syracuse as the Environmental Justice area for purposes of the study (as opposed to the 6 county CNY area) and using our Community Benefits Agreement as a means to meet the required standards.

COR Development projects in both Syracuse and Watertown were recently included in the submissions by the Regional Economic Development Councils of both Central New York and the North Country for the third round of Gov. Andrew Cuomo’s regional council competition for state grants and tax credits for jobs-producing development projects.

The project to convert the old Mercy Hospital in Watertown into apartments, offices and shops is seeking a $5 million in state funding. The project is slated to create over 400 jobs over five years.

The $350 million COR Development project to redevelop the Inner Harbor in Syracuse is seeking a state grant of $1.5 million to relocate an historic freight house, removing three abandoned storage buildings and constructing two 30,000-square-foot mixed-use buildings (each with commercial space on the first floors and 100 apartments on the upper floors).

COR Development has received significant funding for the Inner Harbor development project through the Regional Economic Development Council process since it was initiated by Governor Cuomo: $3 million in 2011 and another $1.5 million in 2012. 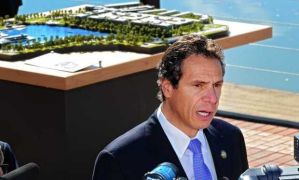 Gov. Andrew Cuomo on Thursday at the Syracuse Inner Harbor, where he announced the construction of an $18 million hotel. (David Lassman | dlassman@syracuse.com)

The Governor announced plans for Starwood Hotels and Resorts, the owner of Sheraton and other hotel brands, to establish an Aloft Hotel at the southern edge of the Inner Harbor.

According to both John Salvatore, director of development for Starwood and Steve Aiello, the President of COR Development, that the hotel would be developed with no public funds, but will use commercial loans and private equity. COR Development will end up owning the hotel as a franchisee–but hire a Starwood-approved management company. No word on the number of proposed jobs.

Through Community Benefits Agreements,
Our Tax Dollars will ensure Jobs for City Residents and Contracts for City Small Businesses.

9:00 am Wednesday, October 23, 2013 in front of City Hall the Urban Jobs Task Force (UJTF) will hold a press conference to address city development. The UJTF is not anti-development. On the contrary, through Community Benefits Agreements (CBAs), our coalition wants city-sponsored development to target city residents in need of employment and city small businesses in need of subcontracts.

Though CBAs are new to Syracuse, they have been implemented successfully throughout the country. Two sterling examples include the 1999 Hollywood and Highland CBA and 2008 Pittsburg Penguin Arena CBA. Since the late nineties, CBAs provided jobs, fair wages, contracts, housing, greenspace, grocery stores, and community centers. Through the CBA process, developers, city officials, and residents work together to meet the needs of the local community

The powerful piece of this new approach is that the community speaks for itself. It negotiates these legal agreements with the developer, be it a private company or a municipality. To be effective CBAs must include compliance monitoring and enforcement. For over a year, the Urban Jobs Task Force has worked with Syracuse University’s Community Development Law Clinic to develop a CBA for the Inner Harbor Project. We want it to serve as a model for how a project benefiting from public revenues can be more inclusive of Syracuse’s poorer neighborhoods struggling with high unemployment. The UJTF has met with the Common Council, the Mayor, the County Executive and Syracuse Industrial Development Agency. The UJTF is ready to collaboratively negotiate an agreement with COR, the developer of the Inner Harbor Project.

The Urban Jobs Task Force (UJTF) is a coalition of city residents and 44 organizations whose mission is to advocate “for job development, training and placement for Syracuse’s un- and under-employed” and to “ encourage the creation of conditions and resources for local businesses under-represented regarding municipal contracts.”

UJTF Archive 2012-2015
Create a free website or blog at WordPress.com.